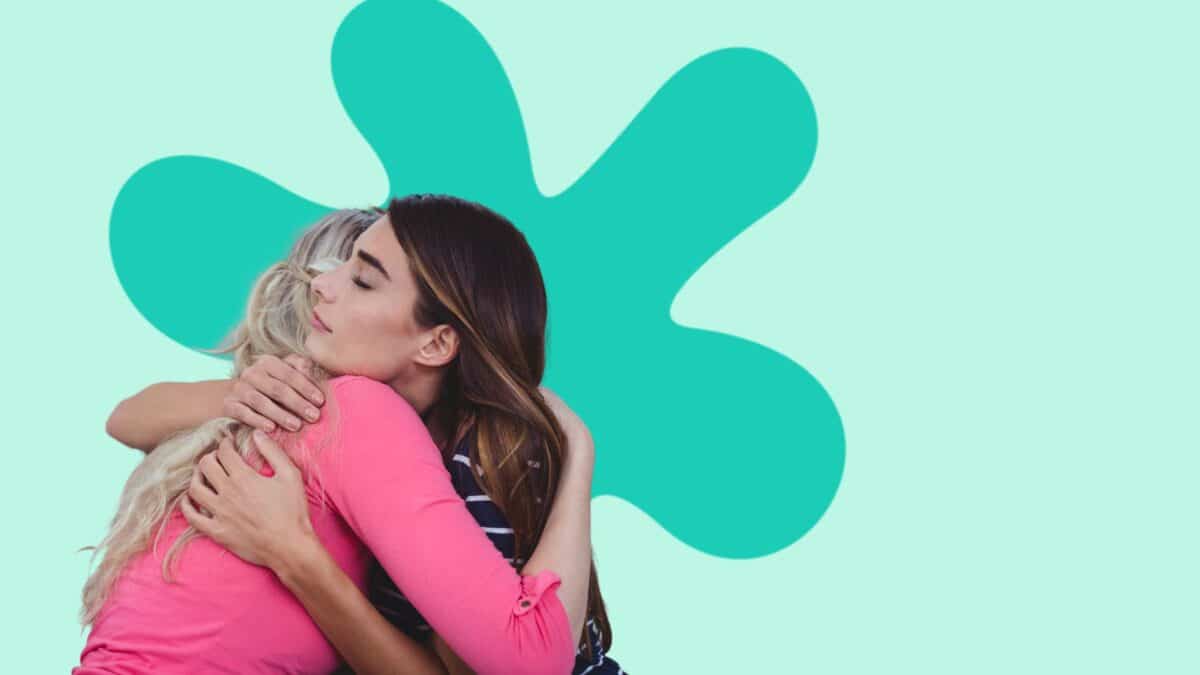 How to Help Someone Having a Panic Attack

Have you ever been with someone while they had a panic attack? One moment, you’re hanging with your friend, and everything is business as usual. You’re going over last night’s Bachelor episode, and the drama was *chef’s kiss*. The next moment, they’re doubled over, saying that they feel scared, like they’re going to die. They’re hyperventilating, shaking, and sweating. What is happening?!

They might be having a panic attack. If you’ve ever had a panic attack, you’ll know that it’s scary af and suuuper overwhelming. But if you don’t know what a panic attack is or why they happen, it can be a big shock to see someone else go through one. But they can happen to anyone, anytime! Even our fave happy-go-lucky Ted Lasso deals with panic attacks.

Symptoms of a Panic Attack

Before you can learn how to help someone, you should probably learn how to spot a panic attack. Important to note: A panic attack can look similar to other things, like a heart attack. The most intense panic attack symptoms usually last around 5-10 minutes, but can go up to an hour. If symptoms come with arm or chest pain and vomiting, seek medical help as soon as you can.

It will look a little different for every person, but here are some common signs of a panic attack that you can look for:

Panic attacks come out of nowhere and can happen at any time. Even in your sleep! That’s part of what makes them so overwhelming and scary for the person that’s experiencing it.

Wanna know more about panic? We have a course in our app on Understanding Panic that’s got all that info for you! Our DiveThru therapist Dr. Justin Puder will teach you about the biological causes of panic, why it might happen, dealing with a panic attack in the moment, and how to manage them in the future. Check the DiveThru app for all that helpful content.

If you’re wondering whether or not your friend is having an anxiety attack or a panic attack, there are a few distinctions between the two. Anxiety attacks are not officially recognized by the American Psychological Association, so there’s no official definition. Generally speaking, an anxiety attack is a sudden increase in the symptoms of anxiety because of a certain situation.

That could be a job change, relationship problem, school stress, or really anything that’s causing them to worry. Their anxiety over the situation may push them to have panic attack-like symptoms. A panic attack is different because it can happen at any time, may or may not have a specific trigger, and the symptoms feel way more intense.

Panic attacks come with a sudden and strong feeling of fear, to the point where the person might feel like they’re dying, whereas an anxiety attack has more of a gradual build-up of worry, apprehension, and stress that boils over.

So if you’re at a carnival with your friend and they feel a huge rush of fear just waiting in line for corn dogs, that’s unexpected. But if they’re super scared of clowns and a Pennywise wannabe runs at them and they have a panic attack, that’s expected. Also kiiiiind of a dick move on the clown’s part.

How to Help Someone During a Panic Attack

Now that we know how to spot a panic attack, let’s go through some of the ways you can help a friend who’s experiencing one.

1. Ask Them What They Need Before It Happens

Okay, this kinda seems obvious, but it will help you so much. If your friend has a history of panic attacks, you may want to have the conversation about what they need ahead of time. Would they be okay with physical contact? Would they want you to get them away from other people, if possible? Having them write a list of what helps them in the moment can really come in handy when they have a panic attack.

Buuut life isn’t always that simple, and sometimes a friend with zero history of panic attacks can experience their first when you’re around. Or, they didn’t tell you about it, because it’s mental health and sometimes people aren’t comfortable sharing stuff like that. If that’s the case, you can also ask them what they need as it happens.

There’s some helpful things you can say to someone having a panic attack, and some things that definitely won’t help.

On the helpful side: you can talk to them by asking what they need you to do, keeping up a light convo if they’re up for it, or reminding them to breathe deep and slow. Don’t take it personally if their answers are snippy or short. They are having a very bad time and they may not be able to communicate in a way that takes your feelings into account. Totally fair.

And on the unhelpful side: telling them what they’re feeling is not going to help right now. They are super aware that they’re freaking out, and probably freaking about the fact that they’re freaking out. There’s layers of freak out going on here! Imagine if you were in a haunted house and your friend yelled “YOU’RE SCARED RIGHT NOW!” at you. No shit, Sherlock!! Stick with words that they can put into action, or stuff that keeps their mind off the panic attack.

They may not want you to talk at all, which is cool too. This is their panic attack and you’ll want to help them get through it in whatever way works for them.

Yes, we mean you need to stay calm too. Your friend is panicking, so it’s important that you remain level-headed in the situation. Panic attacks can happen anytime, anywhere, so it might be inconvenient or uncomfortable for you as well as them. But your friend is definitely not choosing to have this panic attack, and might feel guilty or ashamed about it already. So your calm support will be super helpful.

4. Try Grounding Techniques with Them

This tip will be dependent on how communicative they want to be in the moment. If they’re not down to talk, simply getting them to sit somewhere can help ground them and get them to focus on slow, steady breathing.

If they are okay to talk with you, trying the 5-4-3-2-1 technique can also ground them. With this technique, you get them to name 5 things they can see, 4 they can touch, 3 they can hear, 2 they can smell, and 1 they can taste. This brings them back to the present moment rather than letting their panicked thoughts spiral away from them. You can also try categories, where you offer different topics and they name as many as they can remember, like Bachelor contestants that didn’t get the rose.

The idea here is to get them to focus on something that isn’t their current big scary panic attack will help. Grounding techniques aren’t going to stop the panic attack completely, but it will help make it more bearable for the person experiencing it.

5. Go to the Hospital

This can be a tough call. If your friend has had panic attacks in the past and is certain that this is what they’re going through, they might not feel the need for medical attention. But if this is their first time, it may be for the best. Like we said above, a panic attack can look like other medical issues. Plus, doctors and nurses are trained on how to handle panic attacks and have people going to the hospital for them pretty often. I mean, if it feels like you’re dying, totally makes sense to head to the ER, right?

So talk about this option with your friend, monitor the length and severity of the symptoms, and keep in mind whether or not this is their first panic attack. A little professional help can’t hurt!

6. Support Them After, in Whatever Way They Need

Like a lot of the tips on this list, this will depend on the person. If you’re out in public, your friend may want to go somewhere more private, or head home. If they want you to go with them, great, but if not, it’s best you respect their boundaries and let them go alone.

Empathising with them is key here. They just had a huge, overwhelming rush of fear, and they’re probably wiped out from it. Maybe you go home with them and binge watch Gilmore Girls, maybe they go home alone and take a hard 3 hour nap. How they choose to calm down from the panic attack is up to them. The best you can do is say that you understand, that you support them in whatever way they need, and that you’re there if they want to talk.

Phew! Panic attacks are a lot to handle if you’re having one, and it can help so much to have someone supporting you. By reading this list, you’re equipping yourself with the tools to help someone out, and you’re going to be an incredibly supportive person the next time it happens. If there were Good Mental Health Buddy awards, we’d give you a gold freaking medal. Maybe even an engraved trophy if we wanted to get fancy.